Located on a limestone promontory overlooking the River Wye, Chepstow Castle, even today, dominates the landscape and takes the breath away. It’s both magnificent in its medieval might as it is in its beauty and attention to medieval craftsmanship. Built initially by William fitz Osborn and later William the Conqueror himself, Chepstow saw a succession of medieval Titans – some good, some bad – take possession of its mighty walls. From the exceptional William Marshal, earl of Pembroke to Roger Bigod, the recalcitrant earl of Norfolk, who on occasion opposed Edward I; to the highly volatile and infinitely more dangerous Hugh Despenser the Younger, favourite of Edward II. It was here in 1326, that Edward II and Hugh Despenser the Younger fled and eventually set sail  to escape – possibly for Ireland – from Queen Isabella and Roger Mortimer as their invading army sought the overthrow and destruction of the king and his royal favourite. Chepstow Castle reached it’s peak of power and status in the fourteenth century and, even now, captures the hearts of its visitors. 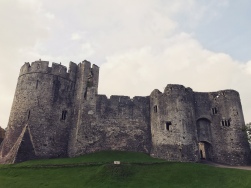 William the Conqueror rewarded loyalty. Following his success at the battle of Hastings in October 1066, he granted to one of his oldest boyhood friends, William fitz Osborn, the earldom of Hereford. According to the contemporary chronicler, Orderic Vitalis, it was William’s desire to fight the Welsh and more importantly erect castles in places of strategic importance. Chepstow, a gateway into Wales was one such place and so fitz Osborn soon set to task, but shortly after his death in 1071, and his son’s betrayal of the Norman king, Chepstow, then noted as ‘Estriguil’ in the Domesday Book of 1086, passed back to the crown.  Fitz Osborn and William’s craftsmen were attracted by the steep limestone cliffs which gave a natural defence to the north and south, meaning that unlike most Norman castles in England at this time, there was no motte-and-bailey required. Chepstow was one of the earliest castles built in stone, which the rather magnificent Norman Tower erected at its heart, stood at an impressive 120 feet long and 45 feet wide. It still dominates today, despite its semi-ruined state. Originally housing a large cellar, a hall, a chamber, a latrine and a chapel, the accommodation was significantly extended when the next notable owner took possession.(1) William Marshal and his five sons who each inherited the castle in turn, expanded the Great Tower skywards in the late twelfth and early to mid thirteenth centuries. 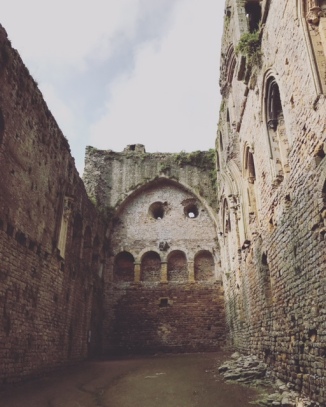 Henry III, who inherited his father’s throne in 1216 at the age of nine, first visited the castle in 1217 and again in 1232. He appears to have been taken with it, gifting the various Marshal brothers successive ‘good oaks’ to repair and build upon the existing structure. The Great Tower became luxurious accommodation and benefitted from the edition of a withdrawing chamber and a private, more palatial, bedchamber on the upper floor.(2) The Lower Bailey to was extensively remodelled, a curtain wall was extended on the east and and south sides of the castle, and a second line of defence was created between the lower and middle baileys, which were marshalled by two round towers. The curtain wall to the north was heightened to for added protection.

By the latter part of the thirteenth century, Chepstow passed into the hands of Roger Bigod, fifth earl of Norfolk (1245-1306). Bigod played a leading role in supporting Edward I’s conquest of Wales in the 1280’s which culminated in the fall of the native Welsh rulers, and was again fighting for the king in France and later Scotland as the decades wore on. Roger was one of the most significant political players of his age. Bigod, unlike all previous owners, chose to make Chepstow his principal residence and from 1271-1304, spent extensive time, money and men transforming it into a medieval ‘des res’. He employed the services of master mason Ralph Gogun of London and built an extensive range of private accommodation, including kitchens, a hall, a beautiful cellar and many associated chambers in the lower bailey.(3) They were so cutting edge for their time they were called the ‘Gloriette’. The largest, and again most palatial, of the castle towers, Marten’s Tower as it later became known, which faces out at the very front of the castle as you approach the main gatehouse, was designed to awe.

No expense was spared in the craftsmanship and details were richly decorated in these spaces. Whether it was beautiful tall windows interwoven with stone roses with views across the River Wye, to beautiful vaulted cellars or intricately and stoutly carved doors, the details go on and on.

The castle had – and still retains – something of a hidden gem. Whilst the oldest door in England still hangs in Westminster Abbey and dates to the time of Edward the Confessor, who built the abbey in the eleventh century, Chepstow has a much grander and well used door that – after recent dendrochronology – dates to the 1190’s. It was during this time that William Marshal began his remodelling of the castle, and this door, was the original for the castle gatehouse, and was in use up until recent decades. The outer side of the door was sheathed by iron plates so would-be attackers would neither batter it down or set it alight during a siege. These plates were held in place by enormous nails that are driven through the wood work and ‘roves’ on the back of the door as seen below, and was a contemporary method for ship building.(4) To think, today as you stand next to it, men such as William Marshal, Roger Bigod, Henry III and Edward I and II have also gazed upon it, and both its design and form has not changed in all that time. It truly is a gateway to the past and all the more fitting because of it.

After the fall of Hugh Despenser the Younger in 1326, the castle passed to the earls of Norfolk again, and in 1403 was provisioned against the threat of Owain Glyn Dwr’s rebellion in Wales. As it happened Glyn Dwr never made it as far south-east as Chepstow, so Thomas Mowbray, earl of Norfolk was not called upon to defend it from attack. In fact the castle saw little action – given how impregnable it was – until the Civil War in the seventeenth century. Previously in royal hands, it fell to the Parliamentarians under the command of Sir Thomas Morgan in 1645 after a three day battering of cannon. The castle was again under royalist command by the time of the outbreak of the second Civil War in 1648, where it was eventually surrendered again to the Parliamentarians who had battered its battlements breaching the south side. The castle was thankfully not slighted and instead used as a military barracks and prison.(5)

Today, the castle remains a romantic, but still very sizeable ruin, and is managed on behalf of the nation by Cadw.

It’s well worth a visit.

I shall leave you with this image I took of the castle on a beautiful still early autumn morning, after the mists cleared and the sun came out, casting a glorious shadow of the Great Tower over the River Wye…something that must have happened time and again since the dawn of the twelfth century.

All Images contained here are taken by the author who exerts strict copyright over them.

One thought on “Chepstow Castle: A Bastion of Medieval Craftsmanship”