I was recently asked if I spend my entire spare time in a dusty archive, pouring over beautiful illuminated manuscripts, letters or household accounts in order to conduct my research for my up coming book. Whilst this occasionally happens, they were sad to hear that most of these beautiful relics of our cultural heritage are now digitised and accessible from the comfort of my house. Although, like the person asking me the question, any opportunity to see the original always gets my vote and the staff at the National Archives and the British Library in particular are very helpful; without them I would have little hope!

In fact, a larger part of my research into the fourteenth century, and Edward II in particular, is done at home. Over the last twenty years, I have had the pleasure of scouring many a secondhand bookshop across the country, as well as Amazon, Abebooks, eBay and of course Waterstones to name but a few, uncovering treasures along the way. Some were planned, some discovered only after a recommendation, and many more were unearthed simply by perchance. But whatever I’ve found has gone onto my bookshelves in my study and before I knew it, I am now well on my way to a personal library. As you can see on the left, these are just a few of the books I’ve bought over the decades. Given that I have moved house three times in five years, the removal company have told me that I should stay put for awhile whilst they recover! I got the hint.

What to read about Edward II

Writing a biography about anyone, whenever they lived, means understanding not just the individual, but also the time that person was living in. Context is key to getting closer to unpicking motivations, explaining actions and understanding the values of the people in their time. So whilst I own a ridiculous amount of books on Edward II himself, I also have ten times as many books on the middle to late medieval period. (1066 – 1485). Researching widely before, during and after reading about Edward the man is imperative if as a writer I am truly going to know the subject of my work. These are just some of the things on my bookshelf that I thought I would share with you today. 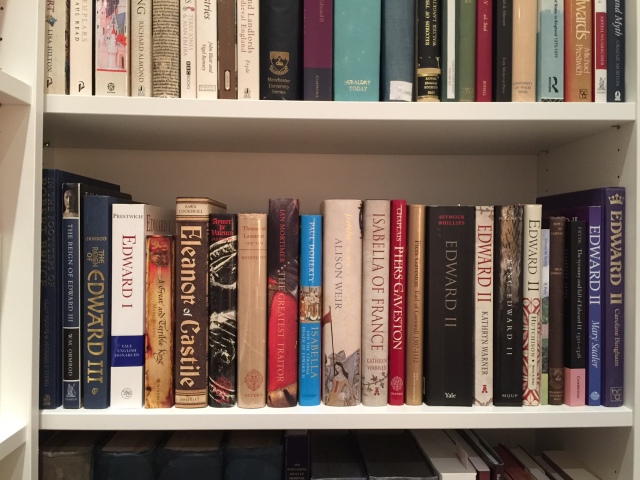 These are just a few of the meaty ones. These are biographical works that get into the nitty gritty of who the key characters of the reign are. It is always useful reading as many as you can get your hands on, taking the time to appreciate the differences each writer presents. You soon get a sense for the bias, which bits they are particularly interested in and how this may influence their overall presentation of the facts; as well of course, their conclusions. The more you read, the more you build up a broad picture of the key – and not so key – players of the time.

A small sample of the many I have hoarded here includes books on Edward II, Isabella of France (wife), Edward I (father), Eleanor of Castile (mother), Edward III (son), Robert the Bruce (King of Scotland), Aymer de Valence (earl of Pembroke), Thomas of Lancaster (cousin), Piers Gaveston (earl of Cornwall and lover of the king), Roger Mortimer (baron of Wigmore, later earl of March). There are many more, but these are the ones I use more frequently.

Getting back to original documents can be both challenging and highly rewarding. Some, but not all of the medieval documents held across the country and in foreign archives are not always translated in modern English. However, at least some of the key documents and texts have over the last hundred and thirty years or more been translated and can still be found on sites like abebooks, amazon and eBay if you look hard. To help discover these, look through the bibliographies of modern books produced on the period you are studying. This will help narrow your search when you type in the right titles when you search online. Original documents are held in archives, both public and private. The latter can often be accessed through written appointments with private archivists. The British Library and the National Archive run courses on how to handle old primary sources and is well worth getting on.

A small sample of some of the translated texts I own in this image include the Calendar of Close Rolls in four volumes, The Parliamentary Rolls of Medieval England Vol III (1307-1326), English Historical Documents (contains various important sources), Calendar of Charters rolls 1300-1326, as well as a number of chronicles that contain both the original and translated texts. These include for example the Vita Edwardi Secundi (two translated versions), the Anonimalle Chronicle from 1307-1334, The Chronicle of Lanercost 1272-1346 and the Scalacronica of the reigns of Edward I and Edward II. 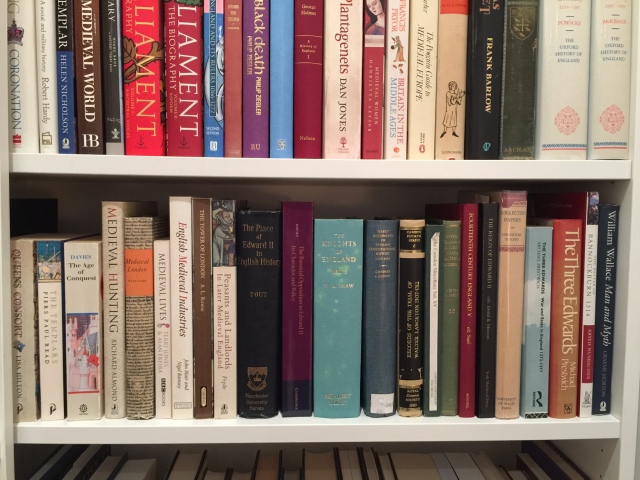 There are a multitude of journals written by academic historians and historical societies. Here are a few of my copies of ‘Fourteenth Century England’ a great collection of essays on the period, which often add useful insight into the reign of Edward II. Other annual publications include the Camden Series – here includes the records for the trial of Walter Langton; The Camden Miscellany – focussing on  Gaveston’s Jewels in 1312-13; Royal Historical Society Transactions – this volume for example has an article on the political career of bishop Adam Orleton who helped bring about the deposition of Edward II. This was a bargain find at Hay-on-Wye for £4. Also on this shelf, in the wrong place is ‘The Select Documents of English Constitutional History 1307-1485’, which belongs in the category above – must have been a late night writing when I placed this back on the shelf! 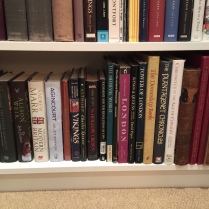 On these shelves are books about the medieval period more generally including medieval hunting, medieval life across society, medieval industries (helps you understand the economy), feudalism, as well as books on important cities like medieval London; the Crusades, the Templars, religion, medieval perceptions of death, saints and much more. These are great for the odd chapter or two when you need to remind yourself about the setting in which people in the fourteenth century lived and why they sometimes made the decisions they did. This is important in my research because for example the Great Famine swept across Europe in the middle part of the second decade of the fourteenth century, and understanding the impact on the populace allows you to understand discontent especially when levied at taxation, the subsequent drop in economic output, reduced coffers for the king and further need for foreign lenders and more pressure and conflict therefore between the king and his nobility. One cannot be separated from the other.

Building a library has taken years of investment in both time and money and a good dose of sensible haggling. Of course, you don’t need to build up a library at home to get closer to the past; the local city, town, village libraries, universities and publications online make many of these books accessible to everyone all of the time.

I’m just a self confessed book addict, and so spend many hours on the hunt for something special. I love the look, feel and smell of a book and so owning them and being able to reach out to my book shelves when I need something at a critical moment during my research or writing is an added bonus.

My best advice for building a library, is start small, and the rest will follow. Find out the local secondhand bookshops both by hitting the streets and also online. Hay-on-Wye, the self-proclaimed ‘Town of Books’ is a mecca for all bibliophiles, and London has many a great secondhand bookshop in Bloomsbury, Camden, Hampstead, along the Charing Cross Road, the Southbank and elsewhere. Don’t be polite, haggle. Secondhand book owners want you to. They love it, and you can come away with a steal.

Lastly, some of my books have also come from many a National Trust secondhand bookshop, which also gives the added satisfaction of knowing that your cash is being spent on conservation, meaning that we too can make our mark on history by preserving the nation’s heritage for future generations to come.

If anyone is interested in any of the books you have seen in my photographs and want to know the ISBN or title etc, please get in contact and I can forward you the details to help you locate from a number of suppliers.

In part two I will share some more of my tips for researching the past, including  online resources and getting out and about on site visits.